Motor yachts, kayaks, pedal boats and a fishing boat Sauna and tub with jacuzzi Tourist attractions Bicycle routes Organized canoeing on the Sapina River Our plan for the Non-obvious Masuria: 5 cities, 26 stories and places worth seeing 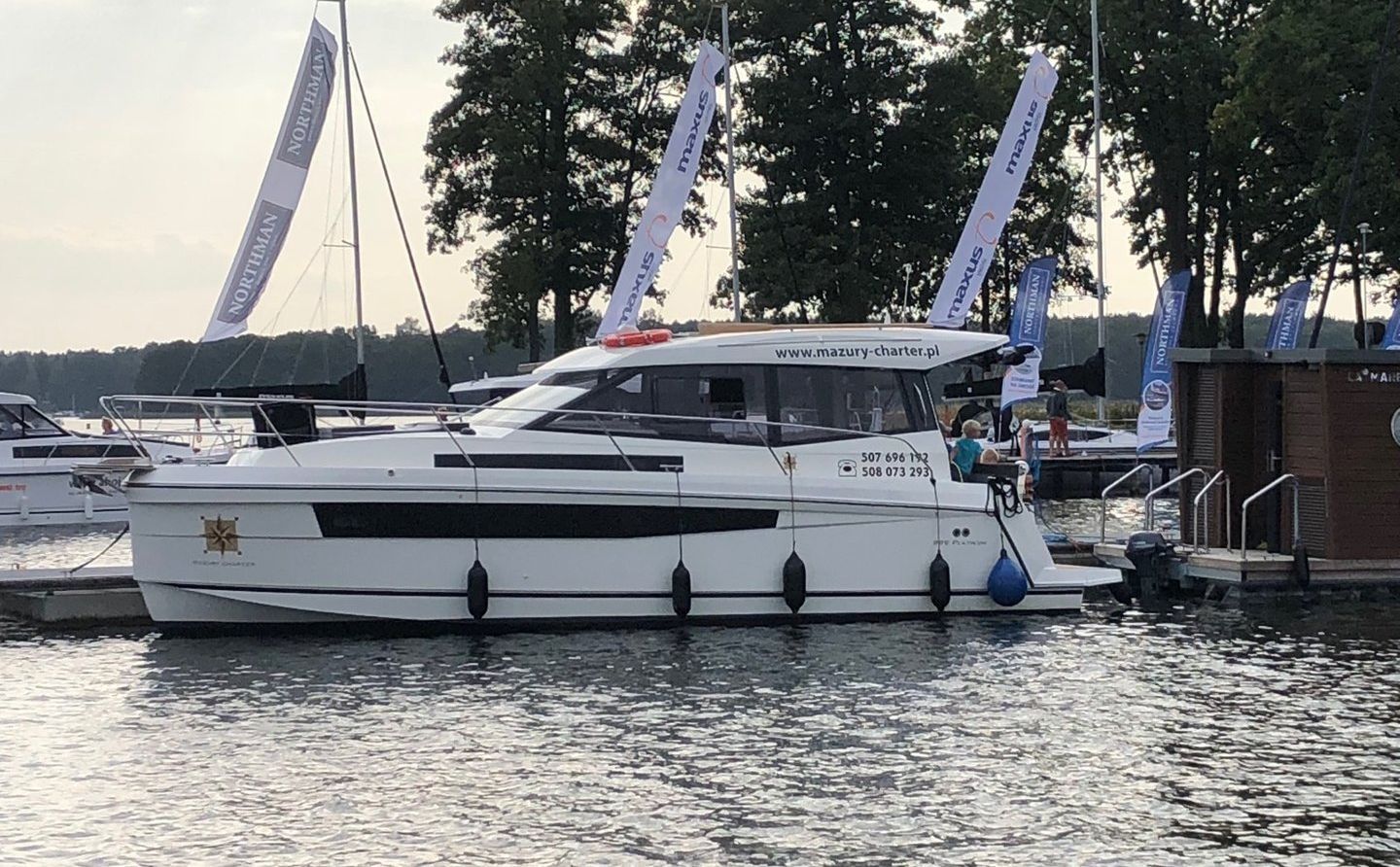 The property has 4 kayaks, 2 pedal boats and a stable rowing and fishing boat. There are life jackets for adults and children in the resort.

In Giżycko, along the Niegocin lake promenade, there is Ekomarina, where our company specializes in renting motor yachts without a patent and Houseboat yachts. The dynamic development allowed us to build one of the largest charter companies in Masuria. Our fleet currently consists of 8 motor yachts of various construction and interior development. We offer a wide range of yachts. Our yachts allow for comfortable swimming and an apartment for 4 to 8 people. The rich equipment of yachts allows for comfortable spending of free time, and additional devices improve maneuverability, thanks to which swimming becomes even safer.

Only for customers of Masuria Resort Village we have prepared extremely promotional prices for charter motor yachts of the Hauseboat type and for the Parker 850 Voyager Cruiser yacht with a 350 HP Mercury engine.

We will make every effort to ensure that your stay is comfortable. 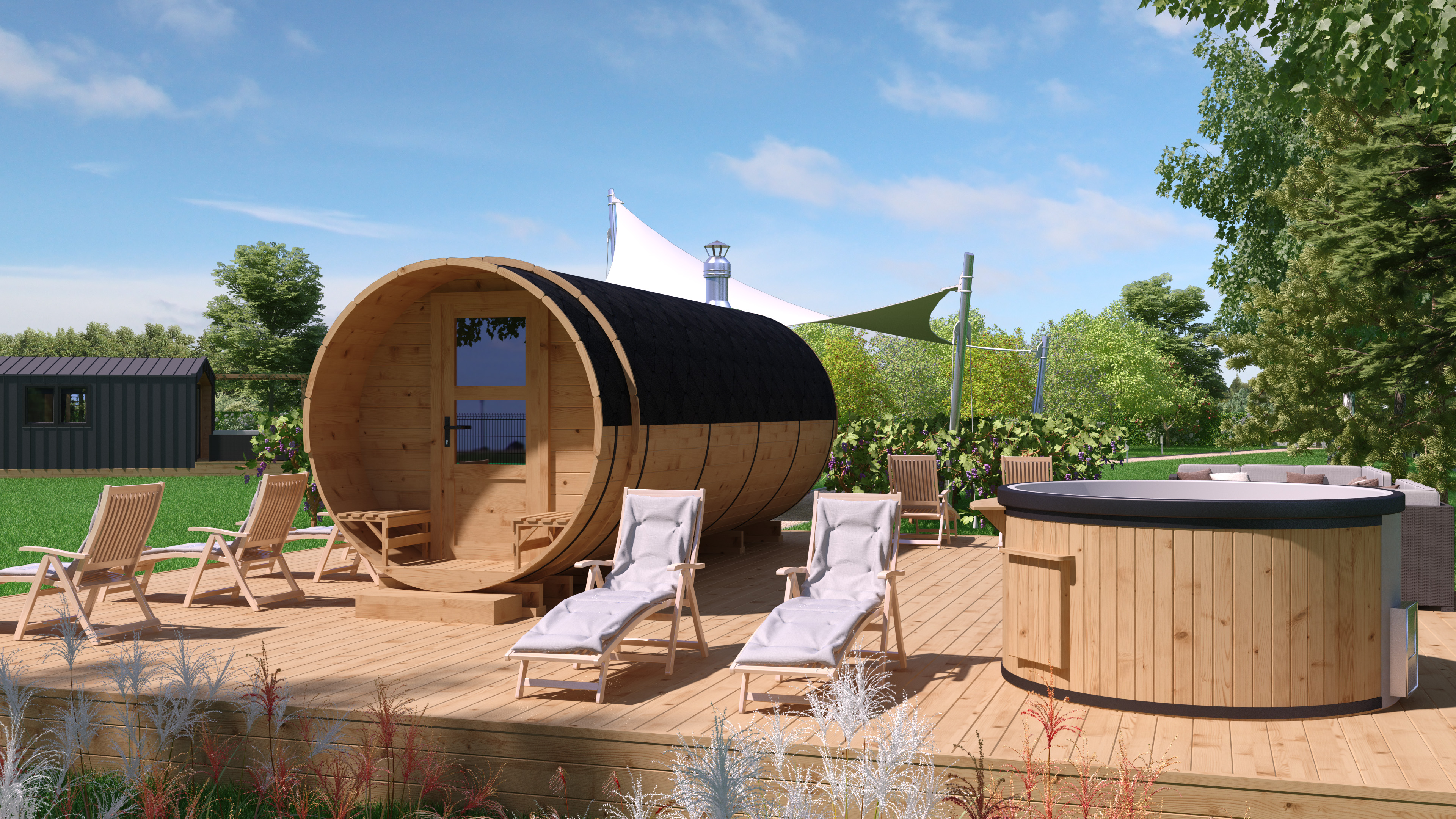 Sauna and tub with jacuzzi

Wood-fired, inspired by origins from Japan and China, it consists of a modern wooden sauna and a garden tub with a jacuzzi that can accommodate up to 8 people at the same time.

Regular sessions in the tub and in the sauna are relaxing and pro-health. The temperature and humidity inside the sauna have a positive effect on the body's self-cleaning. Perfect for people who are struggling with respiratory diseases such as asthma or bronchitis.

Wooden sauna - free-standing in the form of a lying bath barrel does not differ from the use of a traditional sauna made of logs. Our sauna is fully equipped, made of a 400 mm thick spruce log, covered with bituminous shingle. The diameter of the sauna is 220 cm. Sauna room, 450 cm long, equipped with a wood stove and benches, 200 cm changing room + 50 cm terrace 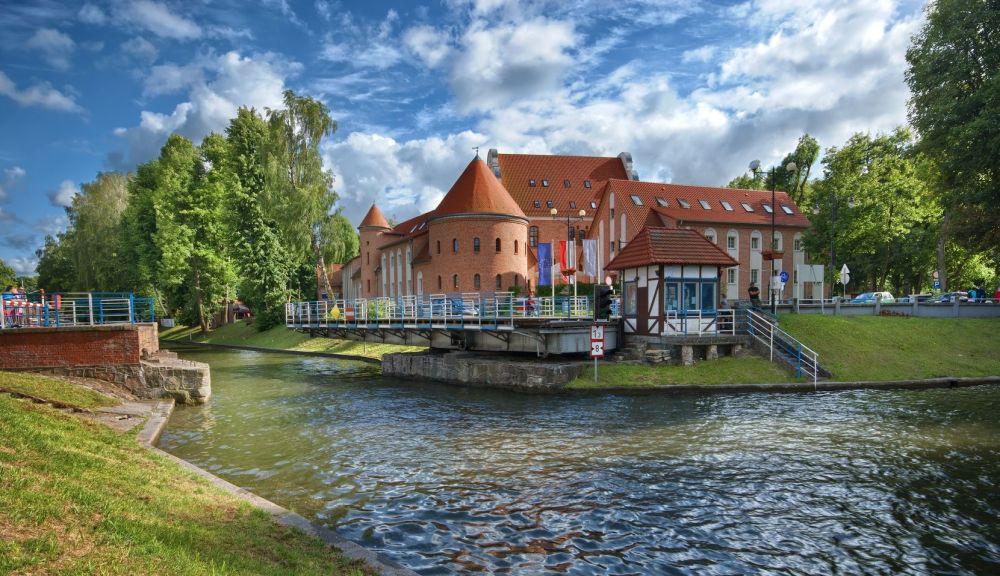 The landscape of the Kruklanki commune was shaped during the last Baltic glaciation. The glacier, which several times moved up and down from these areas, left many interesting forms in the form of moraine elevations and erosive valleys. In a dozen or so such depressions, there are picturesquely situated lakes, the largest of which are GOŁDOPIWO, SOŁTMANY and ŻYWE. Most of the lakes and lakes are connected with each other by watercourses.

The varied topography and soil substrate create favorable conditions for the development of various forms of vegetation: forest, meadow, water, rush and other vegetation. In addition, traditional peasant farms with original Prussian buildings give the area a unique character, the more that the farms often carry out extensive production, which does not have a negative impact on the environment. The Borecka Forest is the real decoration and attraction of the commune.

Its significant areas are characterized by a high degree of naturalness. They are mostly deciduous and mixed forests with an increased share of boreal species. Botanists have distinguished here more than 20 plant communities, the largest of which is occupied by oak-hornbeam forests in their various varieties - deciduous and mixed forests on a clay substrate with dominant tree species such as: English oak, hornbeam, small-leaved lime, Norway spruce, common ash and others.

Mixed spruce forests and mixed forests also have a large share in forest plant communities, and in the depressions of the terrain, wet and peat spruce forests, ash-alder riparian forests and alder forests. In some places, the tree stand is over 100 years old and the atmosphere is truly primeval. These areas are surrounded by reserve protection. The largest is the Borki Reserve, located centrally in the Forest.

Many protected and rare species of plants grow here: yew, daffodil, bear garlic, blue plant, beautifully flowering orchids such as white and greenish orchids and many, many others.

The animal world is also very interesting. The bison is a showcase of the commune, which lives here in the wild, in the number of about 50-60 individuals. Several individuals are permanently locked in a special enclosure and can be admired from the observation deck. Other ungulates are common: roe deer, deer, wild boar. Elk also live here, somewhat rarer are large predators: wolves (about 20) and a pair of lynxes.

On the other hand, foxes, badgers, martens and other small predatory animals are common. About 140 bird species nest in the Forest and its vicinity. Their occurrence is favored by the richness of habitats. Some of them are rare in Poland: white-tailed eagle, eagles, kites, ospreys, eagle owls, black storks and white-backed woodpeckers. Cranes and hazel grouses are common. The lakes with the adjacent Trzcinowskie and wetlands are rich in avifauna. In spring, at the Babka and Brożówka lakes, you can hear the characteristic hum of a very rare bittern.

Various species of ducks, grebes, coots, swans and many others are found in abundance on the lakes. Nature offers its charms before the eyes of interesting observers, who can efficiently navigate along marked bicycle paths. Recently, a natural and educational path has been marked out, on which we can admire and learn not only about the natural values, but also the history of the commune. Tourists also have at their disposal other unmarked routes that cross fields, forests and meadows.

The Kruklanki commune is situated on the border of three attractive geographic regions, i.e. the Great Masurian Lakes Region, Masuria Garbate and the Ełk Lakeland. Nature has created the main tourist attractions.

There are fourteen very clean lakes in the commune with a mandatory silence zone. The largest of them are: Gołdapiwo, Sołtmany, Kruklin and Żywy. Some of them are crossed by the Sapina River, which is an attractive 26-kilometer canoe trail connecting Lake Kruklin with Mamry. 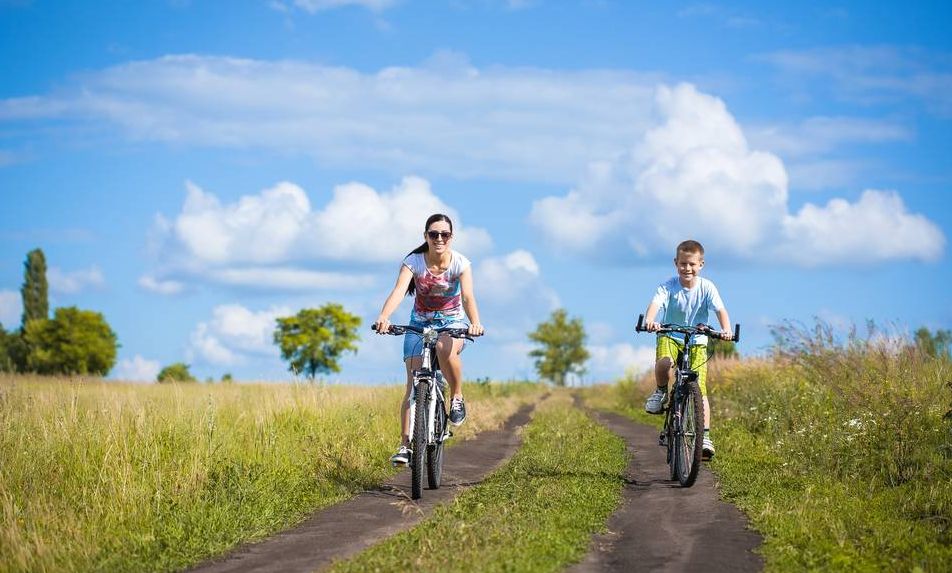 The beauty of the Borecka Forest is best known by hiking or cycling along specially marked routes. There, we will also meet the king of the forest - a bison, who can be seen in the farm next to the Wolisko forester's lodge. 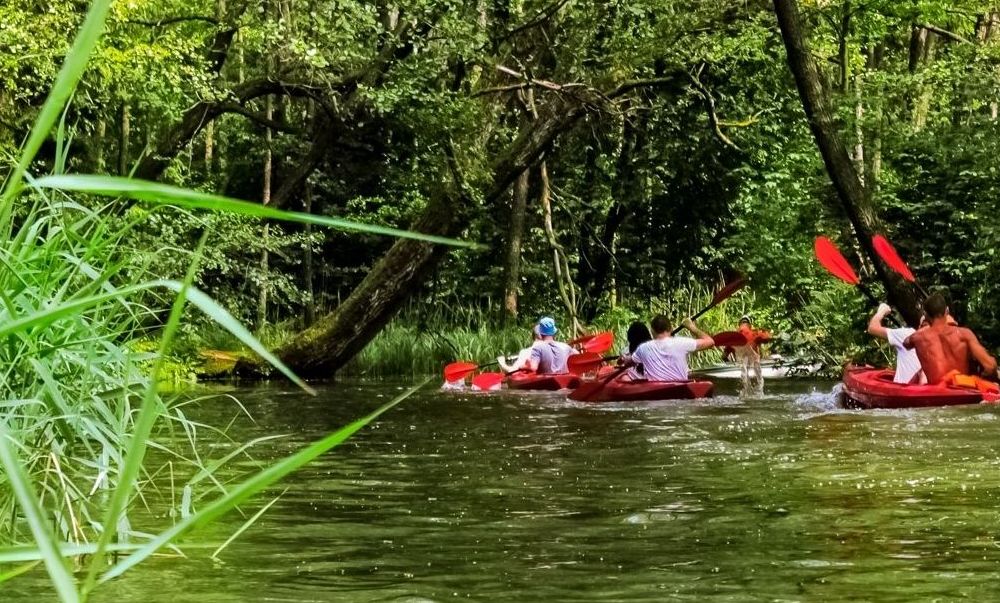 Organized canoeing on the Sapina River

We cordially invite you to kayaking trips. You can go down the Sapina River by a 3-hour canoeing trip on the Kruklin-Gołdopiwo route or a 5-6 hour trip from Lake Kruklin to Lake Święcajty. At the end you can take a bath in a very clean lake. 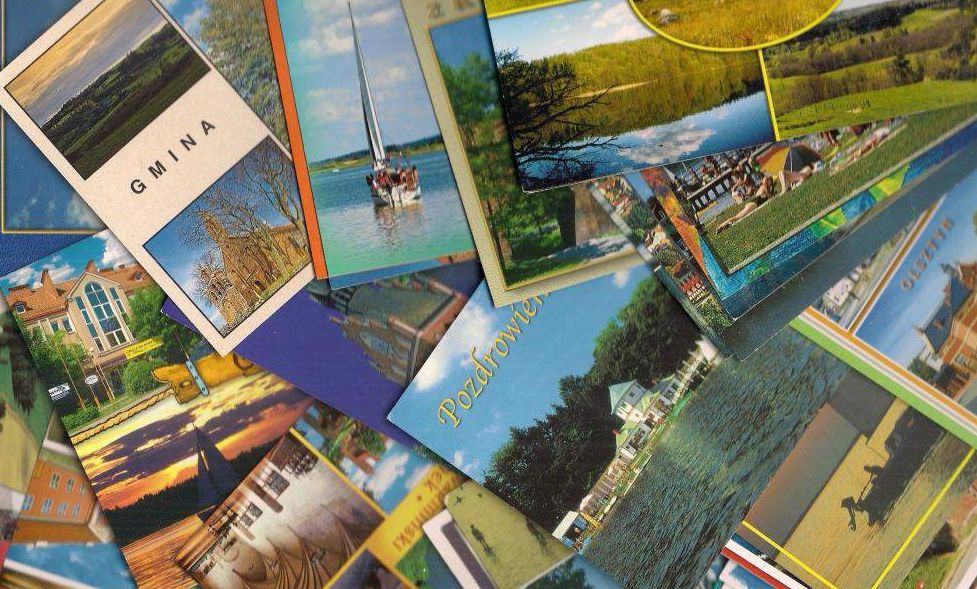 Our plan for the Non-obvious Masuria: 5 cities, 26 stories and places worth seeing

Between the silvery panes of the Great Masurian Lakes, in small Masurian towns, undiscovered stories wander like a spider's web.

You may be surprised that Mrągowo, Mikołajki, Węgorzewo, Pisz and Giżycko are a melting pot of nationalities, ethnicities and religions. There are Catholic churches, Evangelical churches and Orthodox or Greek Catholic churches there. Only synagogues are gone, and in the places of Jewish cemeteries there are garages or viewing water towers. In the place of the former, charming tenement houses, there are green squares. Tourists resting on lakes and in eco-marinas rarely venture into squeak shelters and do not know that they will find traces of the First World War in Węgorzewo. Masuria is still an undiscovered land in which only lakes have been well promoted.